The Best Types of Wallets

Though it might seem like a mundane object that all of us carry around out of necessity and mere convenience, wallets are essential. They hold some of our most prized possessions, including things like our identification and cash. Wallets have been around for centuries, evolving from very simple designs that were created as accessories for carrying personal items in ancient times. Since then, we have been through various innovative styles that have transformed to accommodate our current and ever-changing lives. These days, our wallets have space for credit cards and cash, allowing us to carry what will be most useful in our day-to-day activities.

There are various kinds of wallets, and each one has its advantages. And even better, wallets can be made out of nearly any material, making it possible to find the perfect one for all of our unique needs. Nonetheless, the design is crucial. Not only will we cover some of the most popular designs in today’s modern world, but we’ll also take a look into which are the most useful options. Let’s jump in! The Most Popular Wallet Type

The bi-fold wallet is a classic take on a wallet. The traditional design dates back to the late 1600s when paper money was first introduced and popularized. Later, in the 1950s, the style was modernized to take into account credit cards and identification. The bi-fold has not lost its usefulness since its birth.

Today, the bi-fold is the most popular and well-known around the world. Bi-fold wallets are folded directly in half horizontally and have a pocket for paper bills and several smaller pockets for credit cards. The bi-fold is also widely-known and referred to as the billfold as it folds your money in half along its length.

Various popular designs even include a coin pocket and other spaces for needed documents. Its versatility allows the bi-fold to better hold all of your important items, and, in turn, can become a black hole of unnecessary bulk. That said, it’s a great wallet to keep organized and as clean as possible to ensure that it stays slim and well-fitting in your pocket.

The tri-fold wallet is a more advanced version of the bi-fold. The main difference between the two is essentially what their names imply: a bi-fold is folded into two flaps, while the trifold is folded into three flaps. The tri-fold wallet is very roomy and keeps space for basically anything that you need to keep handy. If you’re looking for a wallet that will hold all of your most beloved items, including cash, cards, and even receipts, a tri-fold might be the way to go.

Not unlike its close cousin, the bi-fold, tri-fold wallets contain plenty of space that can easily become overrun with unneeded items. That said, if you’re looking to keep a tri-fold as your go-to wallet, it’s best to ensure that it stays as neat as possible to avoid bulkiness and the chance of theft. 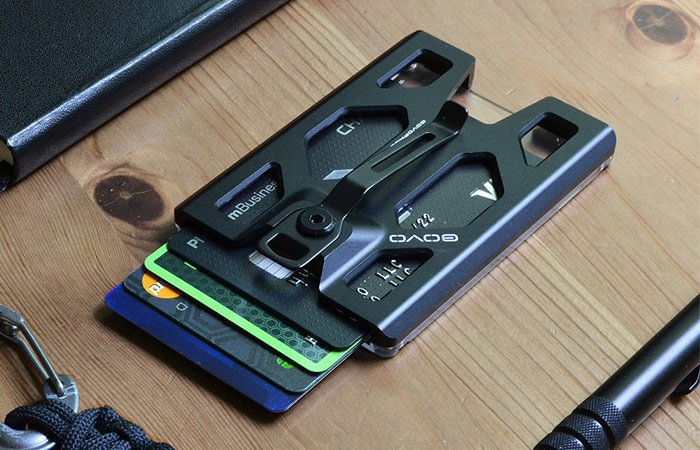 The credit card holder is an extremely sought-after style in the modern age. While the use of paper money has lessened over recent years, credit card holders have become the small, convenient option for holding only the essentials: credit cards.

The cardholder is about the size of a credit card and only holds a few cards—it leaves absolutely no room for loose cash. That said, a credit card holder is useful for those who are in search of downsizing to a slim and minimalist option. Since their design is compact, credit card holders are very versatile concerning location. You can carry them nearly anywhere, including a shirt pocket. They allow for plenty of freedom and enable you to keep your cards secure and easy-to-reach.

However, if you’re hoping for a wallet that will hold all of your items, this small and condensed style might not work for your needs. Consider a cardholder as an option if you’re hoping to lose some bulk and only carry what you need.